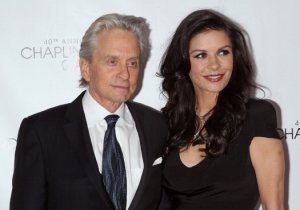 Michael Douglas and Catherine Zeta-Jones have separated.
A source close to the pair tells me, “Michael and Catherine are taking some time apart to evaluate and work on their marriage.”
The couple, who have been married since 2000 and have two children together, have not filed for divorce or made their separation legal.
Douglas and Zeta-Jones have not been
photographed together since April ( see above ).
In recent years, the couple has faced challenges including Douglas’s near-fatal battle with cancer and Zeta-Jones’s bipolar II disorder. 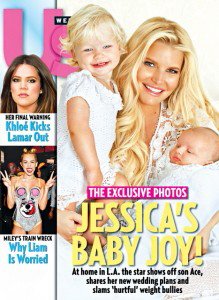 Jessica Simpson debuts two-month-
old son Ace in the new Us Weekly .
The singer poses with her baby boy and 15-month-old daughter Maxwell, and opens up about being a mother of two. “With two kids, we have our hands full, but every day is a new adventure,” Simpson tells the magazine.
So, are there more little ones on the horizon?
“Maybe, maybe not. I have this huge sense of accomplishment, and I feel in
my heart that I’m done,” says Simpson, adding, “But obviously, accidents do happen!”

Justin Bieber Pulled Over For Running Stop Sign, Did Not Have Driver’s License: Report 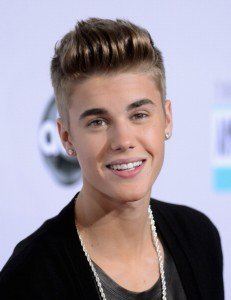 Justin Bieber was pulled over and cited for running a stop sign and driving without a valid license on Wednesday morning in Calabasas, California.
Police reportedly stopped The Biebs after his white Ferrari is said to have blown through a stop sign near his home at approximately 4:30 a.m.
Bieber was cooperative with the cops but did not have a valid California license, according to TMZ .
His passenger was permitted to drive the pop star home. Last November, Bieber was pulled over in his Ferrari and cited for having an expired registration. 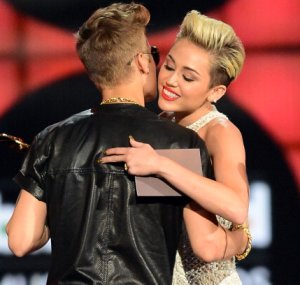 Miley Cyrus and Justin Bieber have joined twerking forces.
The pop performers collaborated with Lil Twist on the song “TWERK,” which leaked on Wednesday.
Cyrus sings, “I came up in the party, time to twerk / I came up in the party and I’m turnt,” while Bieber repeatedly drops his favorite word “swaggy” throughout the track.
The tune is reportedly set to be featured on Lil Twist’s upcoming album. 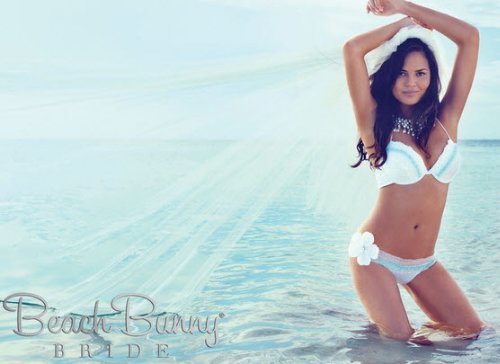 Model Chrissy Teigen is the face of a new Beach Bunny Bride collection. Chrissy also models the new collection. The campaign was shot at Sanctuary Belize by photographer Yu Tsai.
Chrissy said in a statement, “I want to wear a bathing suit for my husband that makes me feel sexy. I know other women feel the same way, so I was inspired to design a line.”

Davido tweets about being single again 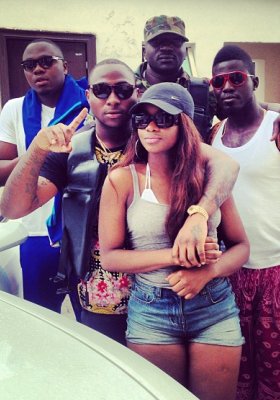 Less than two weeks ago, Davido showed off his girlfriend, a girl named Funmi Aboderin (pictured with him above) on his instagram page…but it seems that relationship is over because he’s now talking heartbreak and being single again. See his Tweets below: 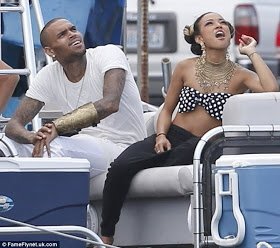 Sorry Rihanna but this dude seems really happy with Karrueche Tran. The on-again couple were photographed on the beach in Hawaii yesterday looking pleased to be in each other’s company as Chris filmed his latest music video. Despite other ladies being on set, Chris was said to only have eyes for Karrueche and rushed to her side whenever he took a break.

Peter Okoye and his crew hit the strip clubs in Toronto, Canada 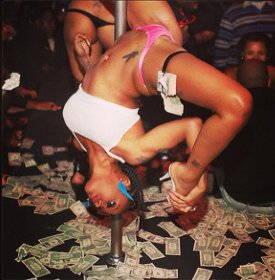 P-Square is on their US/Canada tour. After a performance in Chicago and Texas, they moved to Canada yesterday and hit the strip clubs last night.

Diddy Strikes Down Reports Of J.Cole Fight at VMA After-Party 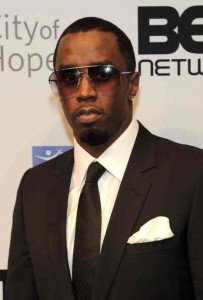 Sean “ Diddy ” Combs ended up in the middle of a scuffle at his and Jay Z ’s star-studded MTV Video Music Awards after-party,” reports the New York Post , which claims “tensions boiled over” between the music mogul and fellow rapper J.Cole .
A so-called “witness” at the bash tells
the paper, “J. Cole was saying
inappropriate things to Sean Combs and his girlfriend, Cassie . Sean
immediately pounced.”
The purported “insider” alleges, “Some pushing and shoving happened. No punches were thrown, but it was a visible disturbance.” Really? Nope .
Diddy took to Twitter on Tuesday to call b.s. on the report, saying, “I usually don’t address rumors but I got too much respect for my bro @JColeNC. We are friends. The rumors are not true.
We had a great party.”
J.Cole also seemingly debunked the rumors on the social media site, tweeting, “People will believe anything.”

Justin Timberlake Defends Miley Cyrus After VMAs: “Let Her Do Her Thing” 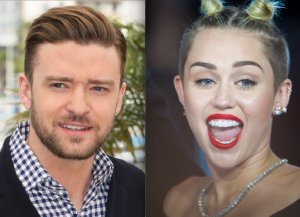 Justin Timberlake says he was OK with Miley Cyrus’ raunchy, controversial performance at the MTV Video Music Awards.
“It’s the VMAs — what did you guys expect?” Timberlake told the “Jim & Kim” morning radio show on Tuesday.
He added, “I like Miley. I like her a lot…
she’s young, she’s letting everyone know she’s growing up.”
“It’s the VMAs. It’s not like she did it at the Grammys,” continued Timberlake. “Let her do her thing.”
The night’s big winner then referenced the awards show’s long history of salacious moments, including past raciness from Madonna — and his own ex-girlfriend Britney Spears .