Harry Styles has reportedly bonded with Bruce Jenner over golf.
Rumours that Harry is romantically involved with Bruce”s daughter Kendall have been circulating for months, and the pair have been spotted out together on numerous occasions.
And now sources reveal that Harry has impressed Bruce with his knowledge of golf, winning his approval to date Kendall.
“When Harry and Bruce met at his Malibu home a couple of weeks ago, Harry charmed his way through the visit by talking about golf. Bruce is very protective when it comes to his daughters.
“He”s experienced how difficult it”s been to have a relationship in the public eye with his estranged wife Kris. Harry wasn”t in for an easy ride but things couldn”t have gone better, all thanks to golf,” an insider told British newspaper the Daily Star.
Harry has had a string of failed high-profile relationships in the past, including with Taylor Swift and British TV presenter Caroline Flack.
Despite dating in the spotlight, 19-year-old Harry revealed that he has only ever slept with two people to GQ magazine last year.
This might be another reason why Bruce took a shine to the One Direction heartthrob.
Kendall and Harry have shared a close friendship in the past, and Harry even jetted back from Paris when the 18-year-old was visiting London last month.

Calvin Harris reportedly added millions to his fortune before the year’s end.
The Scottish DJ and record producer catapulted to the top of the music charts with his debut album, I Created Disco, in 2007.
Nearly seven years later, UK newspaper The Sun reports his company, CH Touring, made more than $2.3 million “in 2013 alone”.
Calvin’s CH Music company reportedly raked in another $5.8 million, sealing his position as one of the world’s most successful DJs, according to the outlet.
Forbes reported in August Calvin’s earnings had already amounted to a staggering $46 million, taking DJ TiÃ«sto down from the top spot of highest paid DJs.
The 29-year-old music producer had plenty to celebrate aside from his fat wallet as he rang in the New Year on Tuesday night.
As The Sun reports, Calvin was surprised by girlfriend Rita Ora while onstage during a gig in Puerto Rico

The top five and all other veteran artists on the list.

D’banj and Burna Boy ‘take it off’ on stage 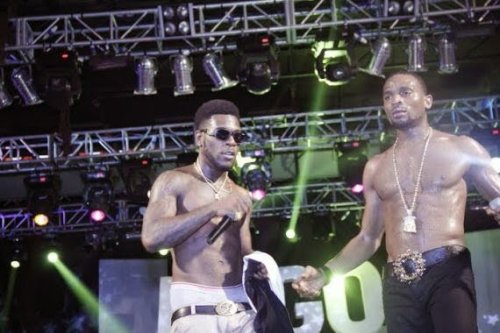 A shirtless D’banj and Burna Boy turned up the heat as they performed on stage in the early hours of this morning at the Lagos Countdown. The sexy men (You’re free to disagree with me :-)) performed their new song ‘Won Da Mo’ to the delight of their female fans.

Chris Brown spent New Year’s day with his girlfriend Karrueche Tran who paid him a visit in rehab and shared a pic of her sucking his tongue outside the Malibu clinic on her instagram page.
“Getting chrae on New Years Day haha #Corny #Ha #HappyNewYears,” Karrueche wrote 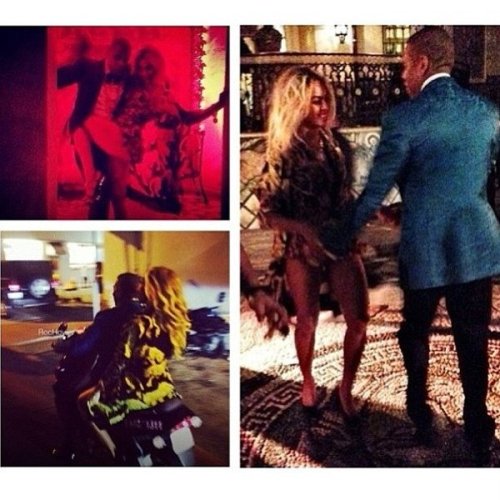 Beyoncé and Jay Z brought in 2014 Miami Style!
The “XO” singer, who opted for a sequined, pantsless ensemble, and her handsome hubby, who looked handsome in a bow tie, blue blazer and black pants, danced the night away at Diddy’s New Year 2014 party at a private Miami estate.
Queen Bey, 32, and Hova, 44, rubbed elbows with Destiny’s Child members Michelle Williams and Kelly Rowland as well as Spike Lee and his wife Tonya Lewis Lee. Other guests included Robin Thicke , Drake (who hopped on the DJ tables for about an hour!), Jeremy Piven, Rick Ross , Jonathan Cheban and French Montana.

At the end of the night, Beyoncé and Jay took a ride on a scooter .
Hov took control of the wheel while his love held on tightly to him,
but it appeared the always fashionable pair was missing the most
important accessory: Their helmets! (To be fair, they might’ve just
taken a little joy ride around the parking lot, but those brilliant
brains of theirs need prime protection at all times!) 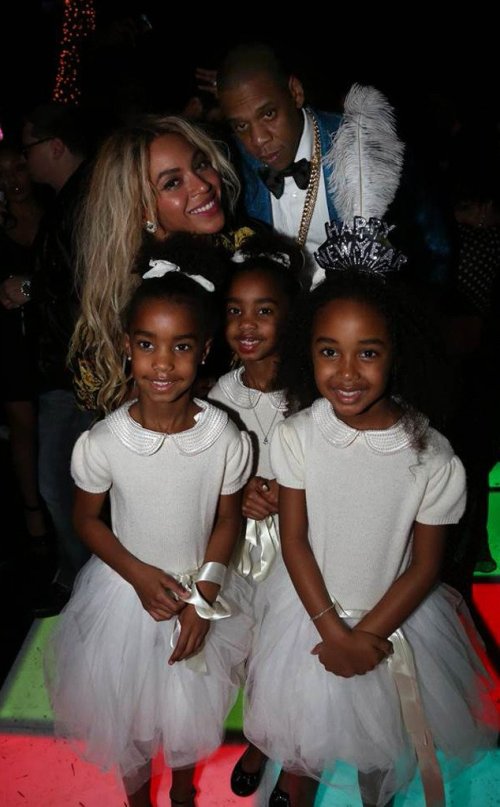 Tori Spelling and Dean McDermott certainly look like they’re starting 2014 on a good note.
The spouses have yet to directly address a woman’s claim that she had sex with Dean, but based on Tori’s Jan. 1, 2014, ediTORIal blog post , it appears the spouses are putting on a united front.
The shot shows two of the couple’s four children ( Liam, 6, Stella, 5, are pictured; Hattie , 2, and Finn , 16 months are not) smiling alongside their parents on a white floor. Tori, 40, is cheek-to-cheek with Dean, 47, even placing a hand on his chest helping to hold a “Happy New Years 2014; [Heart], The McDermotts” poster in place.

Miley Cyrus kissed Ryan Seacrest at midnight, and she wanted all of y’all to see their smooch!
At first, though, the “Adore You” singer feared her lip-lock with the Dick Clark’s New Year’s Rockin’ Eve host had somehow evaded the cameras.
“They missed our New Years kiss,” she tweeted in the wee hours of Jan. 1, 2014, adding emojis of a crying cat and a pair of lips. Ryan retweeted Miley, adding glibly, “oops :/”
But fortunately, that magical moment was immortalized in time!
Miley tweeted a photo of it much later in the day Wednesday, writing, “Yay!!!! They caught our NY midnight kiss! Happy New Years @RyanSeacrest & thank you for having me.”