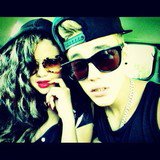 Yesterday TMZ posted a picture, which apparently shows the pair – who broke up in January last year – riding Segways together near Justin’s home.
The 19-year-old star reportedly reconciled with Selena, 21, over the festive period.
‘During the holidays, Justin played on the emotions they have for each other and worked them to his advantage because who wants to be alone during the holidays?’ a source told HollywoodLife.
‘Selena accepted his advances and invitations… She should really watch out though, he is definitely interested in Selena but not for all the right and gentleman type reasons.’
Selena recently cancelled dates on her Stars Dance Tour, claiming she needed to spend some time on herself.
Reports surfaced that the brunette singer is suffering from autoimmune disease lupus and it’s thought her ex-boyfriend could be helping her through a tough time.
‘They’ve been talking every day; he really understands what she’s going through with her lupus. He’s been so supportive because he knew how much she wanted to keep that private,’ the insider said.
‘He’s been trying to get her back for ages and he’s still trying. She’s not back with him but they’re back on way better terms so the door is open for that for sure.’
The popstar pair had been dating on and off since 2010, but went their separate ways after it was claimed Justin flirted with models at the 2012 Victoria’s Secret Fashion Show.
When the star heard Selena was back in the US he apparently wasted no time in contacting her.
‘Justin started to invite her over when he knew she would be in town, now that she is taking time for herself,’ the source said. ‘This isn’t the first time they have hung out recently at his place.’

Harry Styles and Kendall Jenner are still going strong.
Despite careless blogs like Jay Penske’s HollywoodLife reporting the couple had split because he supposedly found her “boring,” Styles and Jenner were spotted at a snowboard shop in Mammoth Lakes, California on Thursday.
A fan named Allie Connolly posted Twitter photos of herself posing separately with the pair ( SEE ABOVE ), telling followers, “Casually hanging out with Kendall Jenner and Harry Styles. #dying.”
However, after getting attacked by some One Direction fans, Connolly regretted sharing the picture.
She tweeted, “Lol now I have 14 year olds telling me that I was paid to make this a publicity stunt. Yep, you caught me hahahah.”
Styles and Jenner have been quietly seeing each other since first stepping out in November.

The ageless beauty showed off her new look at Nigeria Got Talent result show yesterday.

Miley Cyrus did not diss Beyoncé

The pink Chanel bag is about N740k if you convert to Naira. The blue Dior bag is about the same price, not sure what the LV bag (above left) and Fendi bag (below left) costs, but they are pretty expensive bags. And yes she bought all of them. Chika shared the pic on her instagram and wrote;
“These bags called me…”oh! chika buy me”!!! I fell in love with them and took them all home with me. #lv #channel #fendi #dior #workhardplayhard #thingsthatmakemehappy

Ariana Grande covers the February 2014 issue of Teen Vogue .
In the interview, the actress and singer talks about haters and staying true to herself. She also talks about her long distance relationship with The Wanted’s Nathan Sykes.

On Staying True to Herself : “I’m not like a little robot at all. I’m a real person. I don’t try to do things because they will look a certain way. I try to keep it real with my fans.”

On Being in a Long-Distance Relationship with Nathan Sykes : “It’s not as tough as people would think. We have the same music manager, so we can see each other’s schedules and plan little trips as often as we can.”

Ariana has a chameleon friend during part of the shoot.
As MTV notes the chameleon did not even try to blend in with Ariana’s pink outfits. Maybe it wanted to be noticed by Ariana or it wasn’t given enough time to turn pinker.