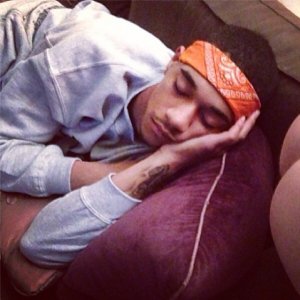 Justin Bieber appears to moon Lil Za in a new picture that shows the recently arrested rapper asleep with someone’s bare butt perched inches from his face.
As I previously reported, The Biebs and his pals are enjoying a snowboarding trip in the aftermath of last week’s police raid on the singer’s house .
On Sunday, Bieber posted an Instagram shot of Za getting some rest, with the caption, “@LilZa u a** leep????” ( see right and below ).
Sure enough, a naked “a**” is on display, not far from the blissfully unaware performer.
Is it Bieber’s butt?
Is it a stand-in?
The case has not been cracked.

This entry was posted in Hollywood Gossip and tagged Justin bieber, Lil Za. Bookmark the permalink.