Just when you thought Beyonce ‘s “Drunk in Love” couldn’t get any raunchier, the pop diva got a little help from Yeezus himself, Kanye West . In the hit song’s new remix, the “Bound 2” rapper adds a explicit new intro to the “Partition” crooner’s new hit single.
Bey, 32, posted a 38-second teaser clip for the remix featuring her dressed as a cowgirl in fringe-covered chaps, a white cutout top, and a cowboy hat while whipping a lasso around her head.
The full-length song is six minutes and 43 seconds and includes Jay Z ‘s original rap toward the end. But even as he spits verses about Bey’s “breastises in my breakfast,” his lyrics seem tame in comparison to those of Kim Kardashian ‘s fiance.

In her coming out speech on Friday, Ellen Page mentioned the difficulty of trying to be herself when Hollywood places “crushing standards” of beauty and lifestyle on everyone, trying to tell both celebrities and the public “how you have to act, how you have to dress, and who you have to be.” The actress referred to one gossip site that recently ran a picture of her wearing sweatpants on the way to the gym, with the writer sniping that Page looked “homeless” and wondering, “Why does the petite beauty insist upon dressing like a massive man?”
Well, E! Online is the site that said that about Page, and the embarrassed outlet just erased the insulting post.
Huffington Post contributor Kia Makarechi noted the removal on Saturday, using a screenshot of a cached version of the since-deleted story ( see above ).
It would have been nice if the site never felt the need to attack Page in the first place.
The E! Online story about Page coming out conveniently leaves out her reference to the outlet’s mean-spirited comments about her. 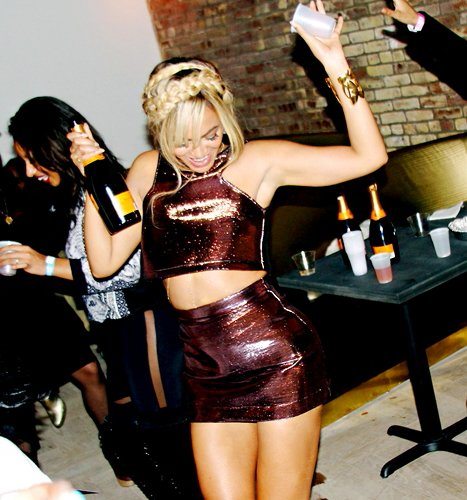 Beyonce isn’t about to let a little snow ruin her good time. The “Drunk in Love” singer attended sister Solange Knowles ‘ MSQFT x SaintHeron New York Fashion Week bash on Wednesday, Feb. 12 — and from the looks of the photos she posted to her tumblr on Friday, it was quite the party.
The pictures show Bey drinking and dancing and generally enjoying herself. In one shot from the night, she holds a bottle of Veuve Cliquot champagne in her hand while appearing to shake her hips to the music. In another, she sips from a plastic cup while grooving in the middle of a crowded dance floor. 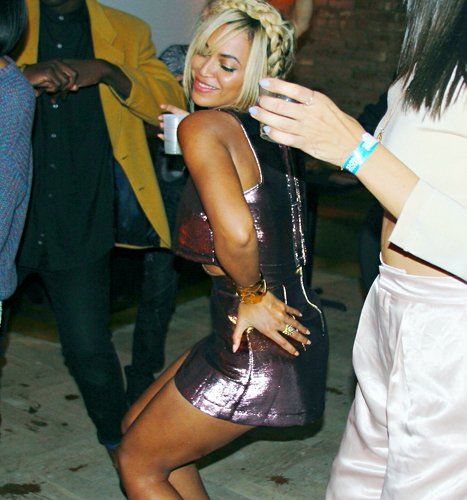 The 32-year-old superstar sizzled in a metallic copper crop top and miniskirt, which showed off her long, toned legs. She accessorized with chunky gold jewelry and pink platform pumps, and her blonde hair was styled in a Heidi-braided updo.

Solange, meanwhile, turned heads in a sexy pink menswear-inspired ensemble, including a blazer worn as a top. Photos show the “Losing You” singer-producer, 27, dancing and drinking alongside her older sister.
Beyonce isn’t just about having fun, though. On Friday, Feb. 14, Queen Bey announced that she’s partnering with real-life royals as part of her global campaign #BeyGood. The superstar plans to raise money for Prince Charles’ youth charity Prince’s Trust on the U.K. dates of her Mrs. Carter Show World Tour.

Chubby cheeks, checking in! Kim Kardashian cradled herb dorable smiling daughter North , nearly 8 months, while making her way through LAX Airport security on Thursday, Feb. 13.
The 33-year-old reality star was photographed (in exclusive photos obtained by X17 ) doting on her baby girl, who gave a sweet, wide-eyed smile as she stared inquisitively at onlookers. Wearing a black turtleneck top and fur-trimmed parka jacket, Kardashian pushed her well-behaved tot, secure in a stroller, through the airport.

If Valentine’s Day is the day of romance, can Feb. 15 be the day of bromance? Here are the best celeb bromances pic

Where was Selena Gomez on Valentine’s day? Well …

Selena’s on the move! On Valentine’s Day, Selena Gomez was spotted heading to London.

Khloé Kardashian has a brand-new main squeeze (or is, at least, getting a sweet squeeze)! And just in time for Valentine’s Day!
Her current love has flowing locks, is stylish in all black, and puckers up nicely…
But no, it is not a new beau. It’s her lovely sister Kylie Jenner sitting in Khloe’s lap quite possibly whispering sweet nothings in her sister’s ear like, “You’re the best twerker ever, teach me?” Or not. We’ll never know, but it’s clear from the photo Khloe is keeping the love within the Kardashian clan this V-day, declaring her darling little sis’ “My valentine,” in the caption.

Kris Jenner is also feeling the love as both of her boys, Scott Disick and Rob Kardashian , played Cupid and struck at the heart of the Queen of the Kardashians by bestowing roses at her feet. Or just her table .
And while Rob’s elegant vase of multicolored blossoms earned him the hashtag, “#bestsonever,” she raved even more about Disick’s beautiful red bouquet, writing…
“WOW thank you @letthelordbewithyou !!!! I love you Happy Valentines Day!!!!!! #mostthoughtfulsonever.” 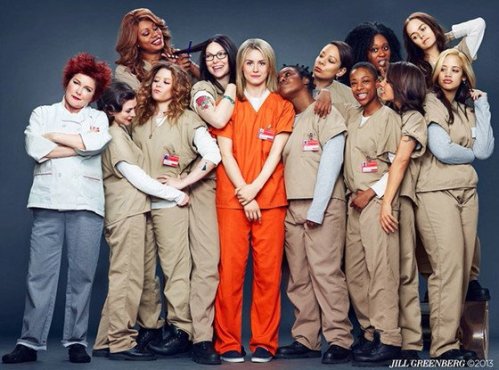 Break out the cuffs, we’re heading back to jail!
Cancel all your plans for Friday, June 6 and make sure to restock your pantry with snacks because that’s when Orange Is the New Black’s highly anticipated second season will be premiering, Netflix confirmed on Saturday.
Just after House of Cards ‘ second season debuted on Friday, Feb. 14, Netflix sneakily announced OITNB ‘s return date via an ad at the very end of Kevin Spacey ‘s political drama’s finale, as first reportedbby Buzzfeed . Well played, Netflix. Well played!

Tagged Orange is the new Black

Kendall Jenner, fresh off her New York Fashion Week debut , has also scored her first Vogue shoot.
The 18-year-old model appears in a selfie-inspired photo series for Vogue.com , shot on Thursday by Jeff Henrikson at the Plaza Hotel.
All of Jenner’s designer fashions came straight from the runway, with spring looks by Oscar de la Renta, Vera Wang , and of course, Marc Jacobs , whose shocking sheer top the teen wore during Thursday’s show.

Vogue says the “sister of Kim, Khloe, and Kourtney is on the verge of It girl–dom in a way that her more famous sisters blew right past in their prolifically documented and methodically unorthodox quest for world domination.”

Christina Aguilera and Matthew Rutler are engaged!
The singer broke the news via Twitter on Valentine’s Day on Friday, tweeting a photo of herself wearing a massive engagement ring as she held Rutler’s hand (see below) .
“He asked and I said……,” wrote Aguilera.
The longtime couple began dating in 2010, after meeting on the set of Burlesque .

This will be Aguilera’s second marriage; she and Jordan Bratman, the father of her son Max , finalized their divorce in 2011 .