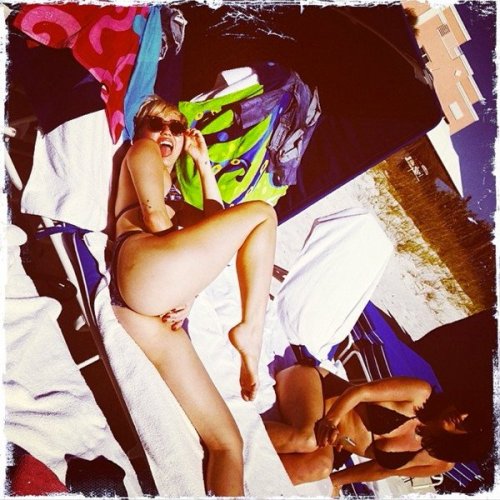 Miley Cyrus has some battle wounds from her Bangerz tour!
The 21-year-old “We Can’t Stop” singer took to her Instagram page to share a sexy bikini photo of herself relaxing on the reach in between shows today.
“#f–kyeahtampa yasss that’s a bruise on my arssss,” Cyrus captioned the photo. In the snapshot, the pop star grabs her crotch while flashing her butt in tiny thong bikini bottoms. On her right butt check in a small bruise, probably from all her wild on-stage singing and dancing of late.

Lorde is responding to the Westboro Baptist Church after the organization said it plans to protest at the singer’s March 21 Kansas City concert.
The star tweeted on Tuesday, “Hahaha omg just found out the westboro baptist church are going to picket my show in Kansas City,” telling concert-goers, “Everyone wear rainbow clothing to that show.”
Lorde added in another post, “Everyone try to kiss church members who are the same sex as you they will so love it.”
She has since deleted her tweets.
On its website, the Westboro Baptist Church called Lorde an “indolent rebel” and also posted a hateful parody of her hit song “Royals.”

Khloe Kardashian is giving Lamar Odom a “second chance” just three months after filing for divorce from the basketball player, reports a cover story from In Touch.
The magazine, which the reality star previously blasted for claiming she’s “not a Kardashian,” now says she’s reuniting with her estranged husband.
A purported “source” tells the tab Odom recently called Kardashian and “cried his heart out to her” and “she melted.”
In Touch says the former NBA star, who recently quit his new Spanish team after a back injury, told the mag, “I want to make it work with Khloe.”
The tabloid’s supposed “insider” further alleges that Odom’s “refusal to stop wearing his wedding ring or sign divorce papers” has “shown Khloe that he’s a changed man.”
The “source” shares, “Khloe believes she and Lamar can recapture the wedded bliss they experienced in 2009.”
Nice made up quote.
Here’s what’s really going on.
Odom does seem unwilling to let go of the pair’s marriage, but Kardashian is doing her best to get past the painful split.
She moved into a new home and is staying busy with filming “Keeping Up With the Kardashians” and promoting the sisters’ new clothing line for kids.
While it’s not known what will happen down the road with Kardashian and Odom, a family insider tells me that right now, reports of a reconciliation between the exes are “not true.”