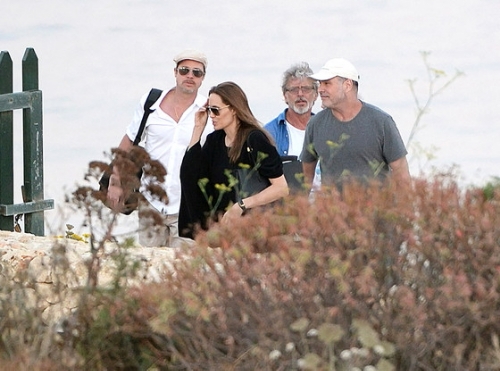 Surprise, Malta! Brad Pitt and Angelina Jolie have paid you a visit! E! News has learned that the Hollywood power couple flew to the small European country for a secret 36-hour film scouting trip connected to an upcoming project of Angelina’s.
“They arrived on a private jet. It was a top secret trip and no one knew they were coming,” a source tells E! News. “They are planning on shooting a movie here for 8-10 weeks from the middle of August.”
While the name of the project was not known, the source said, “It’s Angelina’s film. She’s in charge.”
They were taken by private car to a chartered yacht, which ferried them over to the island of Gozo, which is part of the Maltese island chain in the Mediterranean Sea.

This entry was posted in Hollywood Gossip and tagged Angelina Jolie, Brad Pitt. Bookmark the permalink.