Late night, date night! Jennifer Aniston and Justin Theroux held hands during a NYC dinner date on Tuesday, March 11. The reunited couple enjoyed dinner at Locanda Verde, an Italian restaurant located in Robert DeNiro’s Greenwich Hotel in Manhattan’s trendy Tribeca nabe.
Aniston, 45, looked low-key and comfortable for their outing in black jeans, suede booties, and an oversize knitted sweater. The We’re the Millers star paired her all-black ensemble with an eggplant scarf and stylish hipster frames. Showcased on her left hand was the sparkling diamond ring she’s been sporting since her August 2012 engagement to Theroux.
Theroux, 42, protectively flanked his fiancee, holding her left hand as he guided Aniston to their next destination.
The Wanderlust actor looked hip and grungy in scuffed boots, dark jeans, a navy hoodie, and green bomber jacket. Theroux, who’s currently in NYC filming his upcoming HBO show The Leftovers, gave photographers a handsome inquisitive stare as he walked out of the locale.
According to insiders at the restaurant, the couple enjoyed a private dinner away from the main dining space.

Jennifer Aniston Steps Out With New Hair Extensions—See the Pic!

Jennifer Aniston appears to have said goodbye to her edgy bob and is back to her trademark tresses. With a little help from some hair extensions, of course.
The 44-year-old actress, who chopped several inches off her hair in October, debuted some longer locks on Friday, Jan. 31. The We’re The Millers star was photographed as she left Portia De Rossi’s 41st birthday party at hot spot Crossroads.
Aniston’s fresh shoulder-length ‘do was styled in soft wavy curls.
She looked casual chic for the celebration, sporting a black blazer, skinny jeans and black boots.

Jennifer Aniston Is a Bikini Master: Take a Look at the Actress’ Hot Pic! 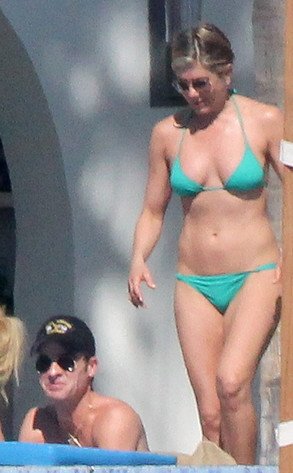 Jennifer Aniston is a woman of many talents, and rocking a two-piece is one of them.
It’s no surprise that the former Friends star is a fan of the beach, so she’s often photographed wearing a tiny bikini and she does it right every time. Case in point: Her recent trip to Mexico .
E! News has learned that Aniston and her love Justin Theroux arrived on a private jet to Cabo San Lucas, where they checked into a private beachfront home in a gated community dubbed Casa Oliver. According to an eyewitness, the engaged couple has “spent most of their time by the pool, tanning and socializing with friends.”
And throughout it all, Jen flaunted her amazing figure in numerous two pieces. 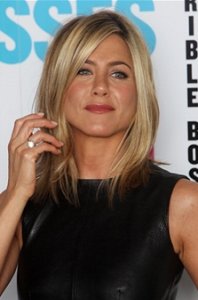 Jennifer Aniston ’s secret to staying young is “placenta crisps,” reports Grazia .
The tabloid, which previously claimed Aniston and Justin Theroux invited Brad Pitt and Angelina Jolie to their wedding,
now says the actress eats chips made out of female placenta to keep her skin looking youthful.
Aniston allegedly also takes placenta pills — but she likes the chips best, reports the magazine.
A supposed “source” claims “Jennifer’s dermatologist told her that a lot of his clients were taking placenta pills because it’s the ‘tissue of youth.’ She gave it a go and found that her skin
was more radiant, she had more energy and felt happier.”
That’s nice…
Not to mention completely made up .
A rep for Aniston tells me , “We never even heard of placenta chips and I’m not even sure there is such a thing.”
Oops.