Selena Gomez Responds To Lorde Diss: “Tearing Down” Fellow Artist is “Not Feminism”

Selena Gomez has responded to Lorde after the 16-year-old rising star called Gomez’s music anti-feminist.
Asked about Gomez in a recent interview with Rolling Stone , the “Royals” singer said, “I love pop music on a sonic level. But I’m a feminist and the theme of her song [‘Come & Get It’] is, ‘When you’re ready come and get it from me.’ I’m sick of women being
portrayed this way.
Gomez hit back at Lorde on Hot 99.5′s “The Kane Show,” sharing, “I appreciate everybody’s opinion, especially because I’ve covered [Lorde’s] music lots of times. I think she is super talented and I think it’s awesome.”
The Spring Breakers actress added, “But… in my opinion it’s not feminism if you’re tearing down another artist.”
Gomez continued, “You know, she’s young, she’s got so much talent… so I don’t take it to heart.”

Miley Cyrus is not only making her own hits , she’s also writing music for other singers.
The pop star revealed on Friday that she penned a new track with Ariana Grande in mind.
Cyrus tweeted, “Why did I wake up and immediately write a song for @ArianaGrande… In the shower.”
Grande was very excited about the possible collaboration, responding, “Omg @MileyCyrus I’m dying I want to hear… And you’re coming over when I get back from London. We’re neighbors
after all… there’s no option.”
Would you like to see Cyrus and Grande join forces? 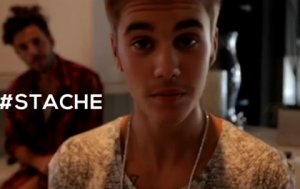 Justin Bieber rocks a mustache and goofs around with friends in a new promo for his upcoming movie, Believe.
In the clip, the singer tells his manager Scooter Braun he’s a “grown man,” while Usher and Bieber’s mom Pattie Mallette give interviews about performer’s maturity.
The preview also shows concert footage from the pop star’s “Believe” tour.
Bieber’s movie, which will combine documentary footage with fictional sequences , hits theaters this Christmas. 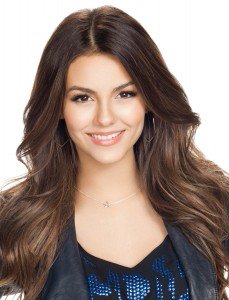 Victoria Justice is moving from Nickelodeon to MTV.
The “Victorious” star has been cast as the lead in a new pilot, “Eye Candy,” based on the 2004 R.L. Stine thriller.
Justice will star as Lindy , “a beautiful but reclusive hacker whose blog exposes everything from terrorist plots to suspected killers.”
“Convinced by her roommate to begin online dating, Lindy is targeted by a dangerous cyber stalker and believes one of her suitors to be the culprit,” says the network. “When things take a
deadly turn, she teams up with the city’s cyber-crime unit to catch the killer.”
The show will be directed and executive produced by Catherine Hardwicke , who helmed Twilight and 13 .
“Well I guess the cat’s out of the bag!” Justice tweeted after the news broke late Friday. “I’m beyond excited 2 be working w/ @MTV on this amazing project.” 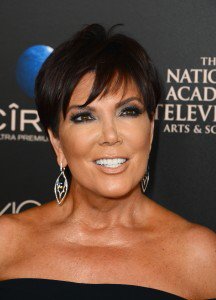 Kris Jenner is slamming RadarOnline for claiming she wants to change her last name in the wake of her separation from husband Bruce .
The webloid had quoted an “insider” who alleged “Kris has seriously been thinking about changing her last name back to Kardashian.”
“Kris always considered [her ex-husband] Robert Kardashian to be the love of her life, and their family empire is built on the Kardashian name,” claimed RadarOnline’s supposed source, adding, “It would be so much simpler if Kris just changed her name back.”
The story seems to be based on little more than an old “Keeping Up with the Kardashians” episode, where Jenner briefly contemplated making the change.
But Jenner says that RadarOnline’s claims that she’s now thinking of finally following through with it are patently false.
“When are people going to realize Radar is owned by the same people who own Star and the [ National] Enquirer ?” asks the matriarch.
She adds to E! News , “I’d like to think people are smarter than to believe this stuff. It’s all rubbish.”

Kanye West to Paparazzi: “We’re In This Together”

Kanye West spoke with paparazzi while at a gas station on Friday, explaining that he’s concerned about how their behavior will affect his daughter North when she gets a little older.
The rapper has infamously gotten physical with photographers in the past, but recently praised them in France, and was happy to discuss his perspective at length on Friday.
He mentioned the recent harassment of Suri Cruise and expressed fears that North would face similar treatment one day.
Then he got reflective.
“We’re in this together… You guys help me influence, you help with the family, you help Kim [Kardashian ’s] power and everything… I would prefer that we just have a decent relationship,” West told the assembled paparazzi.

Macklemore and Ryan Lewis had some fun with a woman scalping their concert tickets on Craigslist, prank calling the seller using a ridiculous British accent.
Macklemore disses his haircut and refers to himself as a “two-hint wonder,” while Lewis swigs from a Jameson bottle and cracks up at his bandmate.

Candice Swanepoel is the Face of The Upside 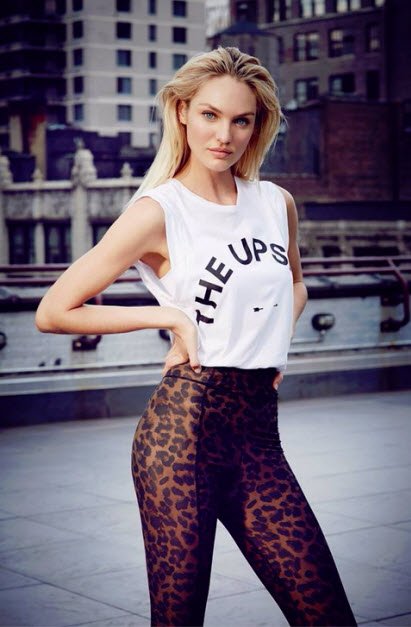 Candice Swanepoel is the face of The Upside. The Upside is a yoga and active wear brand founded by Australian fashion designer Jodhi Meares. The campaign starring Candice is the first for The Upside. It was shot on a rooftop in New York City. Candice is wearing a The Upside shirt and leopard legwear in the above photograph.

T-Mobile has partnered with Shakira. The deal between Shakira and T-Mobile is a multiyear partnership. Shakira is helping the wireless provider kick off a new unlimited global data plan. T-Mobile will support Shakira’s upcoming single and album releases.
The new plan, an expansion of Simple Choice, offers an unlimited global data plan at a flat rate of 20 cents per minute. T-Mobile says the plan includes over 100 countries. Bloomberg reports that T-MObile is the package as a free feature to its main plan.
Shakira said in a statement, “Today is all about bringing the world closer together. I’m excited to partner with T-Mobile and look forward to being able to share my music in new and innovative
ways.”