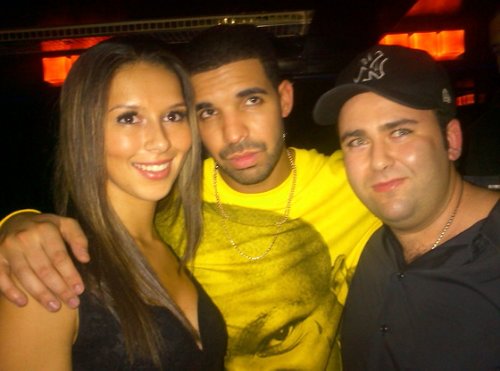 The famous rapper known for huge hits including “Take Care” and “Hold On We’re Going Home” celebrated his 27th birthday in style with a major bash at New York’s newest hot spot Tokya.
Around 200 friends, including fellow rapper Busta Rhymes and New York Giants football star Victor Cruz , were in attendance to enjoy Drake’s big night out.
According to a source, Drake wasn’t flirting with any of his female guests during the party.
Instead, the rapper chose to enjoy the night near a private table with champagne, music from DJ Spade and close friends.
The birthday bash comes right in the middle of Drake’s arena tour.
The Canadian star is traveling across the country in support of his new album, Nothing Was the Same .
With Miguel and Future serving as openers, the tour has grabbed plenty of fans’ attention including Today show’s Al Roker .
The famous weatherman’s hilarious Vine video from Drake’s Connecticut show went viral earlier this week. While Roker’s daughters loved every minute of the show, Roker claimed he was “too old” to enjoy the night.
It’s safe to say someone made a smart choice in missing this birthday bash. Happy Birthday, Drake!

Pregnant Kerry Washington Steps Out for the First Time Since Baby News Goes Public—Take a Look!

Actress Kerry Washington was caught by paparazzi while running errands in New York City today, her first public outing since confirming that she’s pregnant with her first child.
The smiling Scandal star looked extra comfy, wearing light gray sweats with black furry boots and covering her growing baby bump with a baggy striped T-shirt and oversized sweater.
E! News confirmed the pregnancy news earlier this morning, and although Washington’s rep was not immediately available for comment, a source tells us: “She had planned to wait longer because the pregnancy is being well hidden on Scandal with her trademark coats, but it will be pretty obvious on Saturday Night Live this Saturday. So she decided to start telling people now.”

Julia Roberts Steps Out in Malibu Without Any Makeup

Julia Roberts may be nearing 50, but the actress proved she’s just as stunning as ever when she recently stepped out without a stitch of makeup.
Roberts went for a cozy casual look when hitting up a grocery store in Malibu on Tuesday, sporting a pea coat and shearling-lined booties as she stocked up on goods.
On her face, she rocked a pair of black sunnies and not much else, for a gorgeous barefaced look that definitely has us curious about her beauty routine. In keeping with her lovely yet low-key look, she tossed her hair up in a messy top bun.
The star showed off her natural beauty just days after celebrating her 46th birthday with husband Danny Moder in New York, where the pair grabbed brunch at the Little Owl and hit Broadway for the opening night of Betrayal , starring Daniel Craig and Rachel Weisz .
But it wasn’t just Roberts’ makeup-free look that impressed us during her recent day of running errands.
The mother of three flaunted some seriously toned gams in workout shorts she wore under her coat. We’re guessing her trip to the yoga studio following her grocery store visit could have a little something to do with her fabulously fit body.

Oh no she didn’t! We figure that’s something a true diva like Céline Dion or Kelly Rowland would say upon finding that her competitor stole her couture.
Yes, these are two different versions of the same Anthony Vaccarello design, but in the land of the A-list singer, they’re way too close for comfort. We’re not surprised that the “Loved Me Back To Life” singer and X Factor judge both picked this hot black look, but now they’re paying for their perfect taste with a battle of who wore it best?
Right off the bat I’m in love with Celine’s LBD version of the look.
The position of the metallic circles adds the perfect touch but keeps the shape in tact. But outside of that detail, the look gets a little boring. Yes, there’s that one-sleeve action, but the former queen of Vegas could use an accessory or two.
Kelly shows us how it’s done with a dramatic up-do and statement necklace. That said, the long length against the metallic embellishment hugs her thighs in all the wrong places.
So it comes down to proper accessories versus perfect fit. Sadly, we say fit every time, making Celine the singing victor. What’s your say?
Who wears her daring black dress best?
Celine Dion or Kelly Rowland?

Tina Knowles is stepping out with her man!
Beyoncé ‘s hot mama walked the red carpet at the Angel Ball in New York City Tuesday evening with a brand spanking-new accessory: her boyfriend Richard Lawson .
I learned that the fashion designer is dating the V actor and that the duo danced throughout the evening.
An eyewitness says that the couple was “very cute together” at the swanky affair.
Tina, 59, looked positively stunning in a black lace gown with a feathered hem.
She opted for sleek long locks and a bold red lip to ramp up the drama factor for the black-tie gala.
Tina shared with E! News that she’s gearing up for another ensemble of an entirely different kind.
She shared that both she and Beyoncé are excited about getting into costume for Halloween and that Blue Ivy is jumping in on the family fun.
“Beyoncé has about five outfits picked out for her and she has yet to make a decision,” Tina told us .
“They are very excited all to dress up this year.”
We can’t wait to see what’s in store!

Most celebs go through a “bad girl” phase, but it looks like Rita Ora is experiencing the exact opposite.
The “How We Do” singer stepped out in her most sophisticated style to date—a fully beaded Donna Karan stunner. We doubt this edgy Brit is having a full change of fashion heart, but it’s refreshing to see her rocking some classic couture—even if it is some sort of Halloween costume.
From a distance, this metallic stunner looks much simpler than it is.
The close-up details reveal lines of bugle beads draped from the neckline, all the way down to the filtered out tulle train. It’s a work of modern art, which actually makes it less of a hard right turn for the avant-garde lover.
We expect to see Rita in something see through, plastic or spike-covered as early as tomorrow, but for the time being, she’s the belle of the ball. 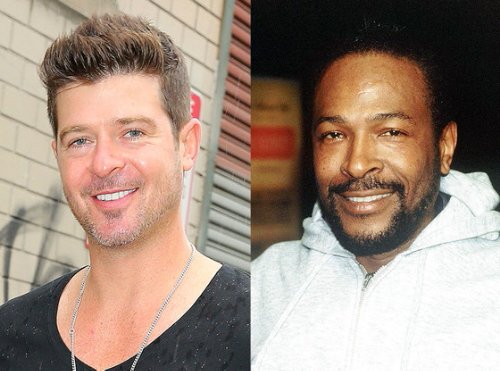 Marvin Gaye ‘s kids feel that “Blurred Lines” crossed a few legal boundaries.
Two of the late singer’s grown children have filed a lawsuit against Robin Thicke , Pharrell Williams and fellow producer Clifford Harris Jr. , alleging that their superlatively popular summer jam wrongfully borrowed from their father’s song “Got to Give It Up,” and that Thicke’s “Love After War” ripped off Gaye’s “After the Dance.”
Siblings Frankie and Nona Gaye state in their suit that the defendants are guilty of the “blatant copying of a constellation of distinctive and significant compositional elements of Marvin Gaye’s classic No. 1 song,” according to documents obtained by The Hollywood Reporter.

Katy Perry’s roar is officially taking over airwaves.
The brunette beauty’s latest album Prism , has debuted at No. 1 on the Billboard top 200 chart, and the “Dark Horse” singer has even set a record for the largest sales week of 2013 for a female artist in the U.S.
Quite an accomplishment!
Over 286,000 units were sold in the album’s first week of release in the U.S., according to Nielsen SoundScan, giving Perry the best sales week for her career to date.
In addition to having a nearly 50 percent increase from the first week sales of her 2010 record, Teenage Dream , which debuted at No. 1 in eight countries and spent more than two years on the Billboard 200, the singer surpassed pal Miley Cyrus’ Bangerz (which sold an impressive 270,000 units in its first week) for this year’s biggest sales week among women.
“I didn’t want to do Teenage Dream 2.0,” Perry recently told Billboard magazine of her new album . ” Teenage Dream was highly conceptual, super-pop art. Prism is more organic, au naturale, vulnerable and honest, but still has the same amount of fun.”
The only other pop album to have a bigger release this year is Daft Punk ‘s Random Access Memories , which sold 339,000 copies.
Prism has also found global success, shooting to No. 1 on iTunes in 90 markets worldwide, and her first hit single “Roar” has spent 11 weeks on the Billboard Hot 100 chart. 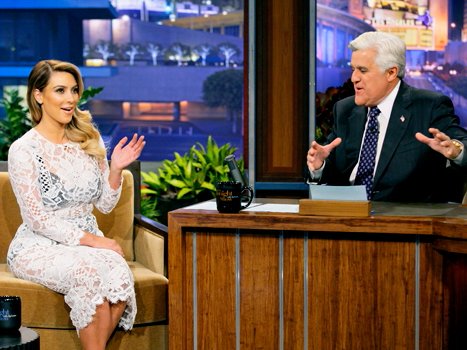 Kim Kardashian is sending a very clear message to her haters — and not just through her words. After being bullied and called fat throughout her pregnancy with daughter North , the newly svelte reality star is proudly flaunting her famous curves all over town.
On Wednesday, Oct. 30, she filmed an appearance on The Tonight Show With Jay Leno , where she showed off her post-baby weight loss in a see-through white-lace dress over a black bra and matching hot pants.
PHOTOS: Kim’s post-baby body Speaking with Leno about the fat-shaming she endured while pregnant, the 33-year-old bombshell said she took the criticism to heart. “It really hurt my soul,” she confessed. “It changed how I am in public. I’ve tried to live more of a private life.”
Indeed, Kardashian and fiance Kanye West kept a low profile after the June birth of their baby daughter. But now that the new mom has shed 50 pounds — via the Atkins diet — she’s feeling more confident. Exhibit A?
Earlier this month, she shared a super revealing photo of herself in a skimpy white bathing suit, a picture she describes as her “big middle finger to the world.”
There will always be haters, of course, but Kardashian is loving life at the moment — and with good reason. Last
week, on her 33rd birthday, her rapper boyfriend surprised her with an elaborate marriage proposal and a huge cushion-cut diamond ring. “I’m very happy right now,” she told Leno. “[The proposal] was the most magical night of my life.”
And as for the wedding? “I want [Kanye] to have whatever he wants,” she told Leno of her fiance, noting that “someplace Parisian” might be nice for the France-loving pair. The couple are “hoping for next summer,” she added, but they “haven’t had time to sit down and talk about it.”
One thing they have talked about is whether the reality star will change her famous name. As West revealed earlier this week, the bride-to-be plans to take her husband’s last name — though she’ll keep Kardashian as her middle name.
“It’ll definitely be West,” she said of the name change. “My daughter’s name is West, and we’re a family.”

Karrueche Tran is standing by Chris Brown as he goes through rehab.
The singer’s on-and-off girlfriend posted an Instagram photo Tuesday showing her and Brown passionately kissing.
“Always & Forever ♥,” she captioned the pic.
Around the same time as Tran shared the personal snapshot, Brown’s rep announced the performer had voluntarily entered treatment, reportedly for anger management issues.
It’s unclear how long Brown will be in rehab, though it seems Tran will be waiting for him when gets out.